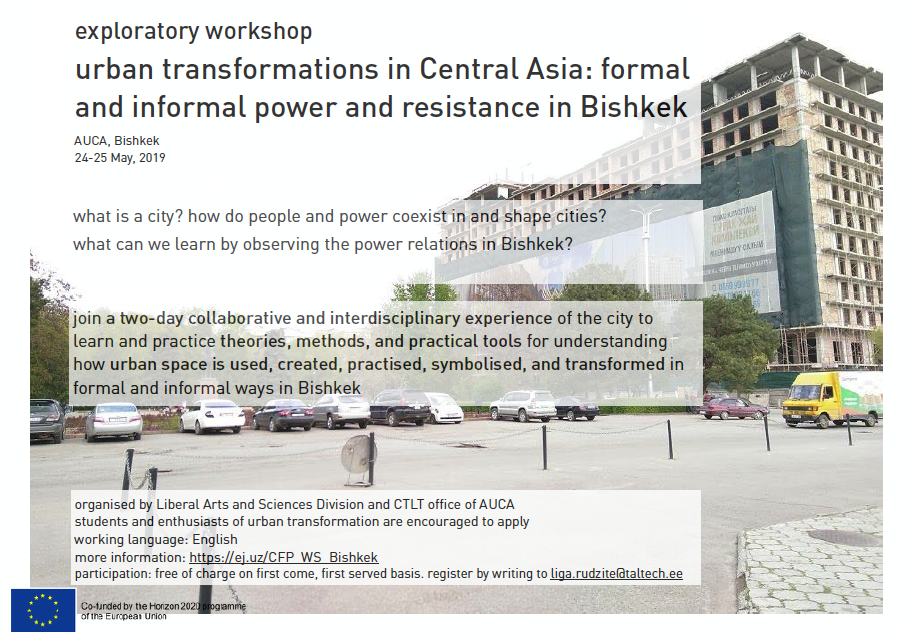 This 2 day practical interdisciplinary practical workshop offered theoretical and methodological knowledge and tools for studying and understanding the nature and relationship between the formal and the informal practices in a city, as well as gave a practical opportunity to observe and critically discuss these practices as they shape and are shaped by the political and economic context of Bishkek.
The workshop was aimed at practising the art of noticing of power relations in a city through a participatory knowledge creation on the ways in which inhabitants of Bishkek conform, resist, and negotiate the power relationships through the formal and informal use and transformation of urban space.

Contemporary urban space is formed by power relations between its inhabitants and both state and non-state actors (Therborn 2018). The public space is organized by dominating and competing political, ideological and economic practices and symbols (Lefebvre 1991). Political and economic actors strive to acquire and maintain power through establishing particular social orders through tools such as privatization and appropriation of space (e.g. private land, shopping malls, petty trading, billboards, new housing estates), regulation of space and the activities that take place in particular spaces (e.g. markets, roads, parks and green zones), creation and dismantling of ideological and moral spaces (e.g. parks and memorials, cemeteries, nightlife joints), and exclusion through unequal access to resources and services (e.g. housing, transportation, sanitation, waste management). Often, these are done with little involvement of inhabitants in decision-making.

However, city dwellers learn both formally and informally to negotiate these spatial power relations and undertake everyday practices which subvert and/or resist the ways in which state and non-state actors construct and develop contemporary urban space (deCerteau 1984). In doing so, citizens are able to counter practices of exclusion, privatization and ideologicalisation of the public space (Hou and Knierbein 2017).

Noticing the formal and informal practices of conformity, resistance, contestation, and communication in urban spaces can provide insights into the particular power dynamics and, through that, illuminate possible pathways for change and transformation (Tsing 2015).

Make sure to copy Registration number after successful submission.

Thank you for payment.

Your ticket for the: Urban transformations in Central Asia: formal and informal power and resistance (Bishkek American University of Central Asia)