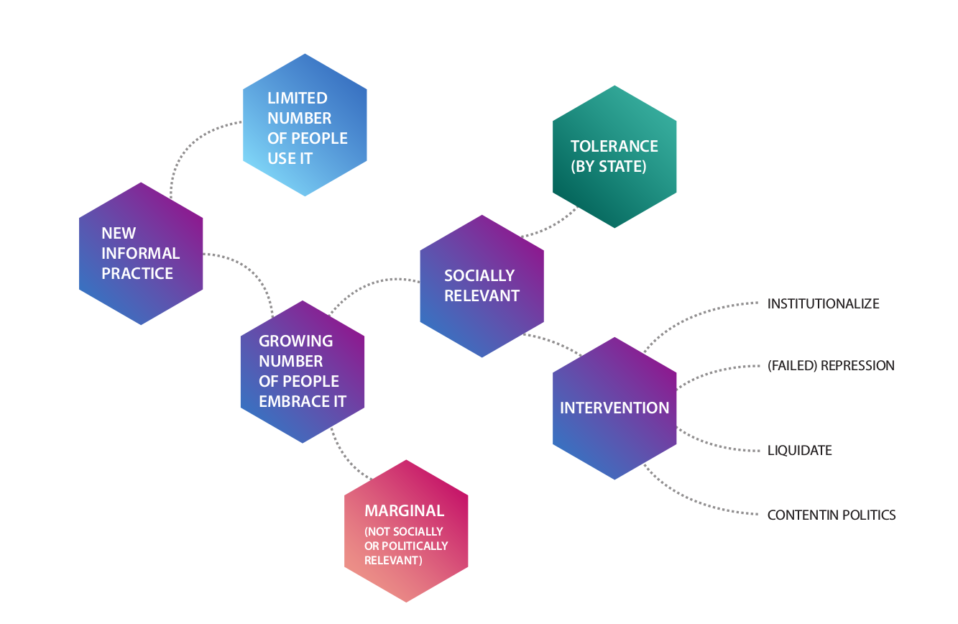 From Economic to Political Informality: Exploring the Link between Shadow Practices, Policy Making and Development (University of Lund)

Rationale and main aims of the workshops

While early works on informality mostly explored its economic aspects (shadow economies, informal sector), recent studies have unveiled the multi-faceted nature of informality. From ways to get things done at the top political level (Ledeneva 2013) to everyday resistance (Scott 1985, 2012), informality has been regarded as an integral part of governance structures and mechanisms (Polese et al. 2017). For this workshop, we give continuity to the classification of the four “flavours of informality” (Polese 2019) to regard informal practices as an act of deliberate, if unorganised, non-compliance with formal instructions. At the everyday level, these actions may remain isolated and sterile. However, once they are embraced regularly by a significant portion of a given population they may come to renegotiate, or even reject, policy measures that are regarded, consciously or unconsciously, as inappropriate for a given situation context.

Footing on these assumptions, with this event, we propose to shift attention away from informality perceived, especially at the everyday level, as a mere survival strategy to think in a different direction. When people produce similar, or even the same, patterns of behaviour, informality can acquire political significance and reshape the way policies are implemented in a given context.

Starting from the above assumptions, our workshop has a three-fold goal.

First, it will expand the scope of theoretical research on informality beyond its economic understanding at the national level, something pointed out by studies by Dixit (2007), Helmke and Levitsky (2005) and Stone (2010) as necessary, but not yet systematically studied. We will look at the role of informal practices in the redefinition and renegotiation of business environments and how entrance and exit barriers are created, causing the reversal that state-led measures were intended to bring about.

Second, it will apply this interpretative framework to look at the way policymaking, and development policies, are affected by informality in the transitional world. This will eventually allow us to engage with worldwide debates from a comparative perspective. Our departure point is the post-socialist region, where informality has been widely studied. However, with this workshop, we intend to upscale the scope of our inquiry to Southeast Asia, Africa, Latin America.

Third, inasmuch as this has been timidly attempted so far, our event represents a chance to establish and develop a research group on informality that can work on further conceptualizations of the relationship between informality, policy-making and development at a global scale. We anticipate some of the contributions to be invited into an edited volume (we have a preliminary agreement with Routledge). In addition, should we have enough papers with a profound theoretical engagement, we will consider pulling together a special issue of a journal

Register for Event: From Economic to Political Informality: Exploring the Link between Shadow Practices, Policy Making and Development (University of Lund)

Make sure to copy Registration number after successful submission.

Thank you for payment.

Your ticket for the: From Economic to Political Informality: Exploring the Link between Shadow Practices, Policy Making and Development (University of Lund)

From Economic to Political Informality: Exploring the Link between Shadow Practices, Policy Making and Development (University of Lund)